I rarely watch the Grammys. The last time might have been in 2010, when Taylor Swift stunk up the joint singing an off-key duet with Stevie Nicks (below). On Sunday, I tuned in again, just in time to hear Adele stink up the joint with her off-key singing.  I really need to stop watching the Grammys.

I was shocked by FX’s decision to have a character do something naughty on the most recent episode of The People v. O.J. Simpson: American Crime Story. Actress Sarah Paulson, playing Marcia Clark, had … wait, what’s this? Folks were upset because she uttered a curse word?

Silly me. I had mistakenly assumed that everyone was upset because Paulson/Clark was repeatedly shown doing something much more horrific than cursing: smoking a cigarette. 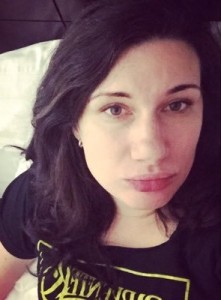 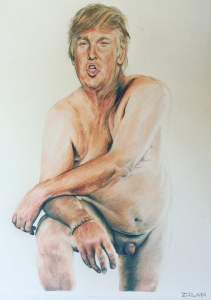 “Artist Illma Gore … actually drew Trump and his popcorn shrimp in all of its majestic glory.”

— Maggie Serota (above left) of Death and Taxes, commenting on an Internet “portrait” (above right) of Donald Trump.

What’s all this grumbling I hear about poor Hillary Clinton, as the only female presidential candidate, being unfairly judged on her looks?