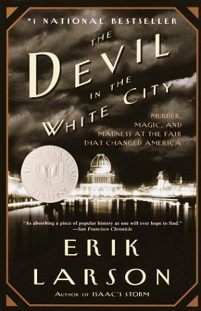 I get depressed when I think of how little I actually know of American history – or world history, for that matter. I had never heard, for example, of H. H. Holmes, an American serial killer who out-rippered Jack the Ripper, both in the ingenuity of his killings and the number of victims. I also knew next to nothing about the Chicago world’s fair of 1893, which is akin to someone a hundred years from now drawing a blank when asked about The Super Bowl.

In Devil, Larson juxtaposes two story lines – the construction of the Chicago exposition, and the nearby killing spree of 19th-century America’s most prolific murderer, a man born Herman Webster Mudgett but better known as H. H. Holmes, a charismatic doctor who lured unsuspecting fair visitors to his hotel, a gloomy edifice near the fair which the press dubbed Holmes’s “Murder Castle.”

Larson deftly weaves back and forth between the sagas of Holmes and the fair but, somewhat surprisingly, I think his depiction of the creation of the against-all-odds exposition is the more compelling read.