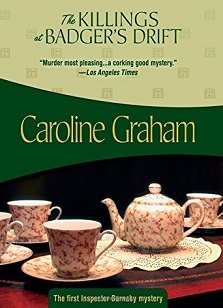 An elderly schoolteacher is found dead, her best friend thinks it’s a case of foul play, and Chief Inspector Barnaby is dispatched to Badger’s Drift to investigate.  Graham sprinkles her prose with words and expressions that are oh-so-British, her characters are colorful, and her plot is clever – albeit at times far-fetched.  My complaint:  I find Graham’s hero, DCI Barnaby, a bit smug and a bit dull.  I have the same problem with the actor (John Nettles) who portrays Barnaby in the popular TV series based on Graham’s novels, Midsomer Murders.