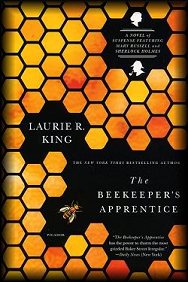 I guess that if Arthur Conan Doyle’s 60 Sherlock Holmes stories just aren’t enough for you, there’s always this, but King’s reimagining of the Holmes saga, in which the legendary detective teams with a teenage girl to solve crimes, is a bit too Nancy Drew Meets Her Teen Idol for my taste.  King ostensibly keeps the relationship paternal between 50-something, semi-retired Holmes and the novel’s heroine, young Mary Russell, but the sexual undertones – Mary giving Holmes backrubs, sleeping in the same compartment with him, etcetera – are prevalent and creepy.  There is also a bizarre, lengthy plot digression in which our two detectives take a break from solving crimes to visit … Palestine.  Huh?