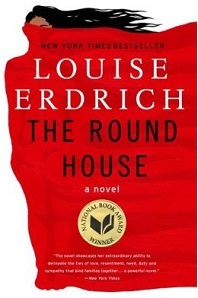 Erdrich wins awards and is a critics’ darling, and there are aspects of her writing that I admire, but to me a lot of the prose in Round House – especially character motivations and behavior – does not ring true.

The protagonist is a 13-year-old Native American whose mother is raped, and so Erdrich is compelled to enter the boy’s head, but the result often reads like a middle-aged woman’s skewed idea of what teen boys think and do.  I also didn’t buy her characterization of some of the adults:  Episodes with a foul-mouthed, hunky Catholic priest are meant to be humorous but are just flat-out bizarre.  On the plus side, the climactic scenes are powerful, and the depiction of life on a North Dakota reservation is colorful.

Some critics predict that this book will be thought of as an American-Indian To Kill a Mockingbird.  I suppose this is because the story is told from a child’s point of view, the boy’s father is an Atticus Finch-like judge, and the plot includes rape, racial tensions, and social injustice.  But To Kill a Mockingbird?  Perhaps in theme, but certainly not in execution.