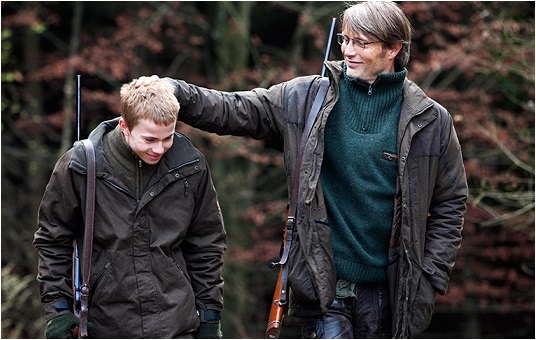 I wouldn’t want to be a Little League coach, or a Big Brother, or a grade-school teacher.  The consequences for an adult male in those occupations who falls under suspicion of improper behavior,  or, as Mads Mikkelsen discovers in The Hunt, sexual misconduct with a child, are simply too harrowing.

Director-writer Thomas Vinterberg makes clear from the outset that Mikkelson, as Danish kindergarten teacher Lucas, is innocent of all wrongdoing when a 5-year-old girl innocently leads another teacher to believe otherwise.  Once the gossip mill begins to churn in the village where Lucas lives and works, his situation goes from unsettling to life-threatening.

Watching The Hunt, I was reminded of the American film Prisoners, in which another adult male is suspected of kidnapping children.  The Hollywood approach to a film like this includes violence, gore, and narrative “twists.”  The goal, apparently, is to shock and awe the audience, because the story itself is not enough.  The European approach – at least in this film – is to eschew twists and gore (there is some limited violence) and instead focus on characters.  The result is a gripping, realistic drama.  There are no great surprises in this movie, but there are no head-scratching, “yeah, right” moments, either.

The only negative for me about The Hunt is its ending, which seems too pat and reassuring – at least, that is, until the final shot.         Grade:  A- 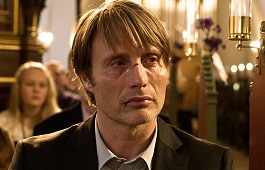 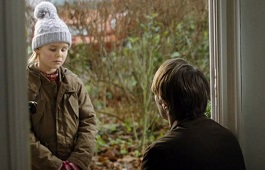 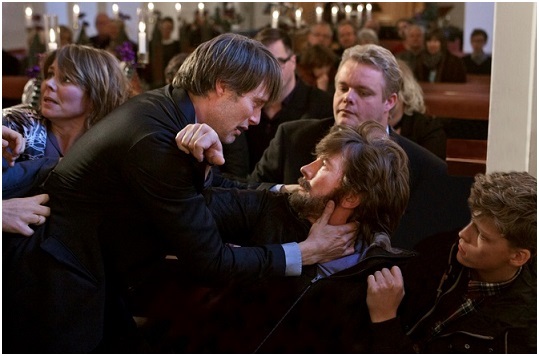