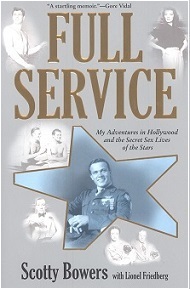 I suppose that when you buy a book written by a Hollywood male prostitute, you really shouldn’t be surprised when it turns out to be about a male prostitute in Hollywood.  Bowers drops famous names and spares no ugly detail in this chronicle of his sexual exploits with everyone from Cary Grant to, possibly, your mother, during a “career” that spanned from World War II to the 1980s.  It’s titillating stuff, certainly, but it’s also a great way to ruin your enjoyment of Turner Classic Movies.  When I put down Full Service, I empathized with movie legend James Dean, whom Bowers quotes from a long-ago Hollywood party:  “Ugh!  Don’t like it,” he sneered.  “Bring me something else.”