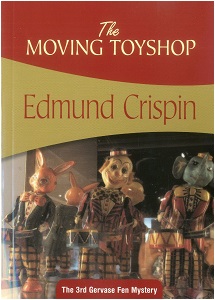 Toyshop is like an Alfred Hitchcock movie on the printed page, which is ironic since Hitchcock lifted a climactic carousel scene directly from this book for his classic Strangers on a Train (the book predates the movie by five years).  But like one of Hitchcock’s famous chase films, Crispin’s novel is one wild and ridiculous roller coaster as our two heroes, one an Oxford don and the other a poet, race to solve the murder of an asphyxiated heiress.  The plot doesn’t always hold up to scrutiny, but it doesn’t really matter because the action is fast-paced, humorous, and sprinkled with comic British banter.