In crime dramas the hero, often a cop, is usually the main attraction:  Sherlock Holmes, Inspector Morse, Hercule Poirot.  Occasionally, the bigger draw is a colorful villain:  Hannibal Lecter, or Gordon Gekko.  What’s rare and remarkable about BBC’s The Fall is that the hero and villain are equally riveting.

Gillian Anderson plays Stella Gibson, a seasoned detective recruited by Belfast police to track down an apparent serial killer.  (Yes, The Fall is yet another serial-killer procedural, but it’s much better than most.)  Stella and the killer have at least one similarity:  a cool detachment from most of the people they deal with.  Gibson has little use for convention, especially the male-centric sexual politics at Belfast police headquarters.

She affects scant interest in anything so retro as traditional family life, and when her hotel tryst with a stud cop accidentally becomes part of an investigation, she pounces on a nosy male colleague:  “That’s what really bothers you, isn’t it – the one-night stand?  ‘Man fucks woman’: Subject ‘man,’ verb ‘fucks,’ object ‘woman.’  That’s OK.  ‘Woman fucks man’: ‘Woman’ subject, ‘man’ object.  That’s not so comfortable for you, is it?”

On the surface, Paul Spector (Jamie Dornan) is much more conventional than Stella.  A professional grief counselor, he is also a devoted father of two young children and a loving husband.  Paul puts a premium on people – unless the people happen to be sexy, professional females who live alone and who attract his attention.  Says Stella:  “The media loves to divide women into virgins and vamps, angels or whores.”  That’s Paul’s philosophy, as well.  He wouldn’t dream of harming his wife or daughter.  But single, bar-hopping women?  Fair game.

As Stella narrates her theory of the killer’s modus operandi, we watch as Paul indulges his dark fantasies, whether stalking a future victim or placing his latest kill (Laura Donnelly, below right) into a tub for a postmortem bath.  And we realize that when Stella and Paul eventually cross paths, the result will be delicious.     Grade:  A- 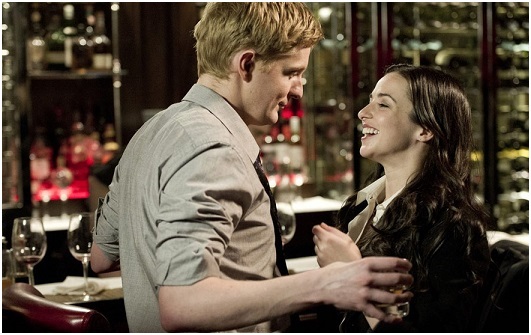 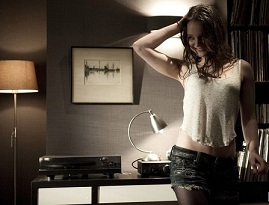