Midnight Movie    If you like low-budget horror, there’s a lot to like about this one.  It has a spunky heroine (Rebekah Brandes) who might be the most appealing “scream queen” since Jamie Lee Curtis, a clever setup (trapped with a killer in a movie theater), and one line — “You want her?  You gotta go through me first!” — that, in context, is priceless.  Sadly, it also has the usual bane of low-budget schlock:  a plot that quickly turns preposterous.  Release:  2008  Grade:  C+ 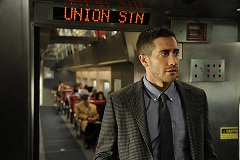 Source Code     It’s Groundhog Day for poor Jake Gyllenhaal, who must repeatedly travel back in time to prevent an act of terrorism  — and repeatedly get blown up in the process.  Clever ideas are introduced, but cramming action-movie sequences, a budding romance, and metaphysical musings into one 93-minute film results in an incoherent mess.  Release:  2011  Grade:  B-

The Orphanage     This Spanish chiller about a woman (Belen Rueda) returning to her childhood home, an orphanage, is a handsome production, replete with moody, haunting atmosphere — but not much in the way of actual scares.  Orphanage doesn’t insult your intelligence, which is refreshing, but several plot elements in this ghost story are a bit, ahem, familiar.  Release:  2007  Grade:  B 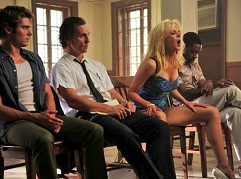 The Paperboy     An odd mix of black comedy with lurid sex, murder, and mayhem, The Paperboy is too all over the place to completely satisfy, but individual scenes and performances are memorable — especially drooling, malevolent John Cusack as a Florida swampland hick who might have been unjustly imprisoned for murder.  Release:  2012  Grade:  B-
*****

Orphan    With just a tweak here and a nudge there, Orphan might have joined the likes of The Sixth Sense and The Exorcist as one of the great horror films.  It has a delicious twist, some fine performances and, unlike those other films, it manages to frighten without resorting to the supernatural.  Eleven-year-old Isabelle Fuhrman, utterly convincing as the titular demon-child, almost — but not quite — pulls off a pivotal transformation late in the film; if she had, Linda Blair might have had competition in evil kid horror-movie history.  Release:  2009  Grade:  B+