by Mark Owen and Kevin Maurer 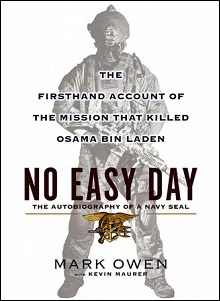 “In all of my deployments, we routinely saw this phenomenon.  The higher up the food chain the targeted individual was, the bigger a pussy he was.  The leaders were less willing to fight.  It is always the young and impressionable who strap on the explosives and blow themselves up.”  Those words are from “Mark Owen,” co-author of No Easy Day and one of the Navy SEALs responsible for killing Osama bin Laden.

The book is a compelling look at the day-to-day life of an elite SEAL, and I’m sure it’s a great recruitment tool for the military.  However … if only Owen had left it at that.  Owen (a pseudonym), who claims that he and his fellow SEALs don’t much concern themselves with politics, does little to hide his disdain for Barack Obama, and presumably liberals in general – yet has nothing to say about the “young and impressionable” Americans who died in the bogus war begun by Obama’s predecessor.