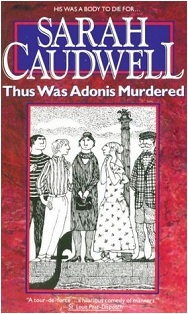 Caudwell’s characters inhabit an odd-but-arresting literary universe.  Time-warp a clique of Edwardian aristocrats to 1980s London, engage them with casual sex and lots of snarky-yet-sophisticated banter, and you have a good picture of Caudwell’s protagonists, a quartet of young barristers who decipher a murder mystery under the tutelage of “Hilary,” their middle-aged mentor.  In real life, you’d likely want to deliver a swift kick in the pants to these self-satisfied twentysomethings, whose every comment is cloaked in irony, sarcasm, or snobbery.  But in Caudwell’s clever hands, they’re amusing, rather than annoying.