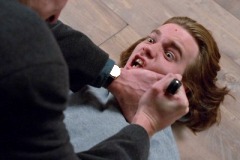 Shallow Grave     Three Edinburgh roommates (excuse me, “flatmates”) advertise for a fourth — and wind up with a suitcase full of money and a dead man in the house.  Director Danny Boyle’s film is clever and unpredictable, but not particularly suspenseful.  That’s because the leads are all so unsympathetic that, really, it’s hard to much care what happens to them.  Release:  1994  Grade:  B 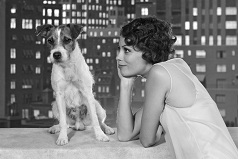 The Artist     A valentine to old Hollywood — and not just silent movies, but that whole era comprising “the way they used to make ’em.”  If you’ve seen A Star Is Born or Sunset Boulevard, then the basic storyline will be familiar, but who cares when it’s this well done?  And kudos to a Jack Russell terrier named Uggie.   Says a (subtitled) cop:  “I’ll say one thing, he [the film’s hero] owes his life to that dog!”  The filmmakers might owe a Best Picture Oscar to that dog.  Release:  2011  Grade:  A 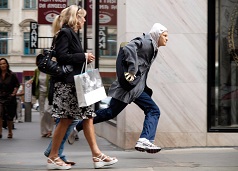 The Robber     An ex-con finds that life on the outside is better when he runs marathon races, bangs a social worker … and robs banks.  The robberies and chases, when they come, are exciting, but for a movie about bank heists and running, too much of The Robber moves at a snail’s pace.  Compounding the funereal tone of the film is a romance between our bad-guy hero (Andreas Lust) and his girlfriend (Franziska Weisz), both of whom exude all the heat and passion of an Austrian winter.  Release:  2010  Grade:  C+ 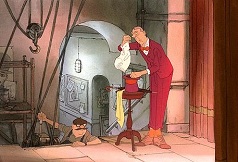 The Illusionist     Proving that animated films aren’t just for kids, this whimsical ode to fatherhood is gorgeous and, yes, sentimental, but not overly so.  Based on an unproduced script by legendary French comic Jacques Tati, the story concerns a down-on-his-luck magician whose travels through Europe in 1959 land him an unexpected ward:  a doe-eyed Scottish lass named Alice.  It’s a quiet movie, nearly silent, but its striking images and simple story might leave you believing that magic exists, after all.  Release:  2010  Grade:  B+

Cronos     On the plus side, Guillermo del Toro’s debut feature is visually arresting and boasts a few memorable scenes.  But the movie’s story, in which an antiques dealer and his young granddaughter share a secret about a magical artifact, is paper-thin.  The result is fantasy that’s moderately absorbing, but never scary and not nearly as touching as it wants to be.  Release:  1993  Grade:  B- 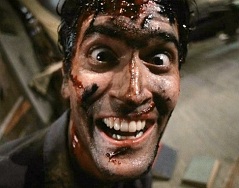 Evil Dead II     OK, so maybe you have to be “in the mood” for it, but if you are, Sam Raimi’s sequel to The Evil Dead is about as close as Hollywood ever got to a live-action Looney Tune, melding horror and slapstick with an emphasis on laughs.  And if they gave out Oscars for performances in low-budget splatter flicks, lantern-jawed Bruce Campbell would be a shoo-in.  Campbell’s priceless mugging, Raimi’s frenetic camerawork, and some hilariously hokey special effects ensure that this is still the best “cabin in the woods” movie ever made.  Release:  1987  Grade:  B+