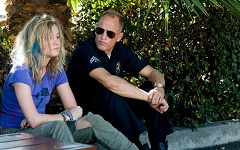 Rampart     See Woody snarl.  See Woody cry.  See Woody puke.  This is an “actors’ movie” if ever there was one, and Harrelson is very good as a crooked L.A. cop, but you still need a story, and Rampart’s plot is threadbare and unpleasant.  Release:  2011  Grade:  C 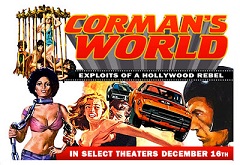 Corman’s World     For decades, Roger Corman has been Hollywood’s crazy uncle, the embarrassing relation who tells dirty jokes at dinner and insists on shots of whiskey for dessert.  Corman made B movies, but his list of protégés is impressively A-list.  Jack Nicholson and Martin Scorsese are just two of the Corman graduates who pay tribute in this entertaining, clip-filled documentary.  Corman himself never graduated to the Hollywood big-time — a fact not really explained in this movie.  Release:  2011  Grade:  B 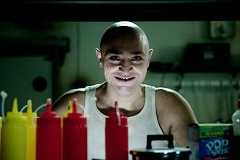 Asylum Blackout     My bar is at ground level for low-budget horror movies, but this one isn’t half-bad.  Here is what Asylum has going for it:  1) characters with some depth; not a whole lot of depth, but more than we usually get when kids hang out at cabins in the woods (in this case, the kids are trapped in a mental hospital when the power goes out);  2) some genuine suspense;  3) an intelligent screenplay, albeit a tad too smart for its own good near the end;  4) ominous settings;  and 5) a good, creepy villain.  Release:  2011  Grade:  B