The Secret Life of Bob Hope 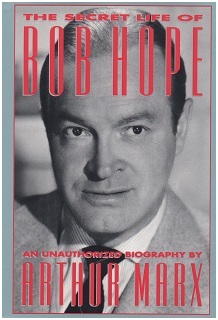 The Good:  I loved the showbiz stories, and they are legion in this book because Hope’s career spanned 1920s vaudeville to 1990s television.  Despite the unflattering tales of Hope’s adulterous affairs (also legion), Marx’s reporting seems fair and balanced.  For every unsavory sex episode, there are examples of the entertainer’s outstanding philanthropy.  Hope is a fascinating subject and Marx sheds light on much – but not all – of his life.

The Bad:  Even though I gobbled up those show-biz tales, there might be a few too many of them.  Marx covers nearly every benefit, tour, movie, radio show, and airplane ride of Hope’s storied career.  Some of Marx’s critical allegations would benefit from footnotes, which are conspicuously missing.   The book’s editing and proofreading are horrendous – or nonexistent.

The Verdict:  When I finished the book, I had a strong desire to watch Hope at his best in some of his 1940s Paramount pictures.  But I was also disillusioned by his hypocrisy and embarrassing career windup – pretty much everything he appeared in from 1960 until his death at age 100 was dreadful.  If you idolize Hope the man, this book will shatter your illusions.  Yes, Hope’s USO tours are legendary – but so are his adulterous flings, misogyny, right-wing politics, and miserliness.