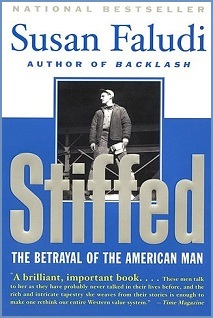 As I read Susan Faludi’s (Backlash) depressing opus about the “crisis” in American manhood, I kept changing my opinion of its author.  At times I wanted to laud Faludi for her insightful reporting – and sometimes I wanted to throttle her for general cluelessness.  As a former journalist, I appreciate the sheer amount of legwork that went into her book.  She interviewed scores of men, from construction workers to porn stars, and much of her analysis is thoughtful.   But occasionally Faludi adopts the tone of a victor perched atop the pedestal of feminism, sitting subtly and condescendingly in judgment of pitiful males.