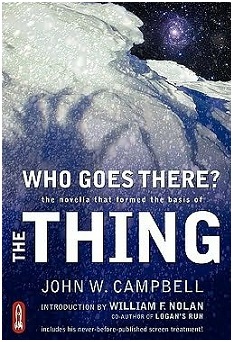 This is why, in some literary circles, science-fiction gets so little respect.  Campbell had a great idea – malevolent, alien life force, frozen in Antarctica for millennia, is thawed by a small group of unwitting scientists – and he put his pen to paper.  But Campbell had one problem:  He could not write.  Let me rephrase that:  Campbell writes abominably.  He never uses an adjective when two or three will do, he indulges in hyperbole, and he garbles grammar.  Huge chunks of the novella are incomprehensible.  I have no idea how Who Goes There? found a publisher, but I can see why Hollywood found it attractive.  Campbell’s premise was one that filmmakers could build upon – and improve with very little effort (The Thing movies are based on this story).  Yes, in this case, the movies really are better than the book.