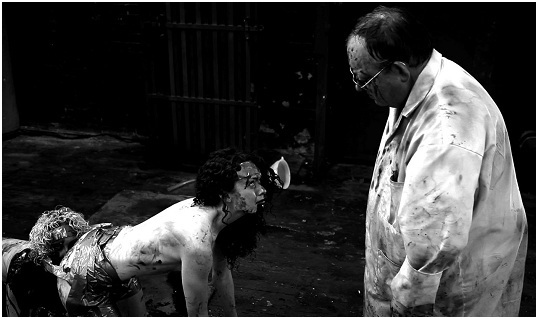 When The Human Centipede (First Sequence) crawled onto the scene last year, I was — sort of — among the much-maligned movie’s defenders.  Sure, it was a low-budget horror flick, but director Tom Six’s little creep-fest was as original as the dickens.  Yes, its central set-up — a mad doctor wants to surgically connect three people, anus to mouth — was off-putting, but Six wasn’t overly graphic and his approach was more creepy than clinical.

Mostly, the first Human Centipede was a hoot.  Dieter Laser, as crazed Dr. Heiter, was a modern-day Vincent Price, and his delusions of grandeur were ripe for satire.  By the time South Park delivered a hilarious send-up of the “centipede,” Six’s small European horror movie had gone from underground cult favorite to campy cultural phenomenon.  How could a sequel top that?  Six makes an attempt by dispensing with most of the original film’s black humor and replacing it with explicitness — which doesn’t really work; what we are left with is a whole lot of unpleasantness.

Dr. Heiter is missing from the sequel, replaced by Martin (Laurence R. Harvey), a Norman Batesian endomorph who lives with his mother, works at an underground parking garage, and fantasizes endlessly about the first Centipede movie.  The first half of Centipede 2 is padded with all-too-familiar psycho-boy staples:  Martin’s childhood sexual abuse, his domineering mother, his stunted sexuality, and his preoccupation with bizarre hobbies.  This is all just filler to get us to the main event.

What you think of the last part of Centipede 2 depends on what kind of filmgoer you are.  If you are jaded and/or detached, the type of viewer who analyzes special effects rather than cringe at the sight of fake blood, you might appreciate the graphic depiction of Martin’s “surgery,” which he accomplishes with duct tape, a crowbar, and a staple gun.  If, on the other hand, you blanch at the sight of violence in the movies, then this is decidedly not the film for you.      Grade:  C 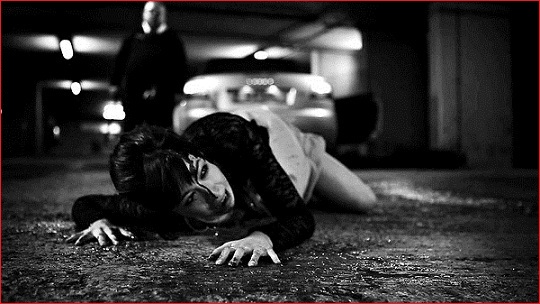 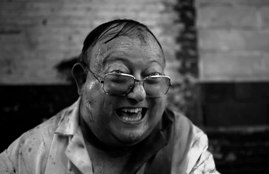 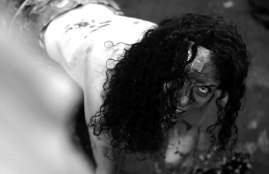 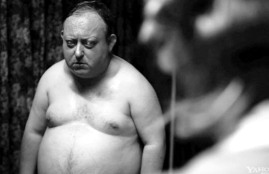 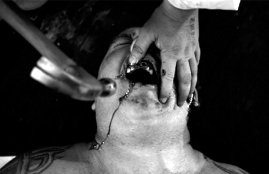