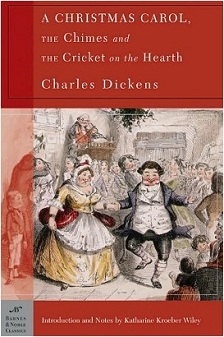 Crabby criticisms of a beloved book

Admit it:  The world would be a better place if more people were like pre-ghost Ebenezer Scrooge, a cantankerous old coot who nevertheless kept to himself and contributed to society, rather than like post-ghost Scrooge, a giddy imbecile who ran amok, imposing himself on friends and foes alike.  What an unbearable world it would be if all 7 billion of us went about like the “new and improved” Scrooge – foisting turkeys on each other, barging into family dinners, and frightening small children.

But seriously … I think Dickens is so enduring because his characters and dialogue still sparkle in the 21st century.  Dickens’ stories – like that of Ebenezer Scrooge – are often sentimental and overblown – but oh, such memorable people!  I suppose it says more about me than about Dickens, but I prefer his later, darker works (Great Expectations, A Tale of Two Cities) to early, syrupy Dickens (Oliver Twist, A Christmas Carol).