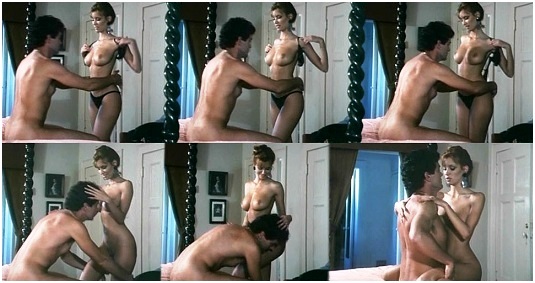 Important Note:  They say that a film review is often more about the reviewer than the movie itself, so I want it “on the record” that I had nothing to do with the following review.  I didn’t write it; somebody else is responsible for the words and opinions that follow.  I didn’t write this introduction, either.  In fact, I strongly disapprove of this review, just as I disapprove of this introduction.

There was a time when my pecker was perpetually primed, presumptuous, and problematic (I won’t say pretty), and it was all I could do to placate said pecker by preemptively programming the TV.  In other words, we (my penile pal and I) watched “Cinemax After Dark.”

On one such occasion, my persistent protuberance demanded that we view the 1984 movie Love Scenes.

Love Scenes is the story of film director Peter and his lovely wife, movie star Val.  Peter and Val have a boring sex life, so Peter decides to spice things up by casting Val in his latest project, a steamy potboiler co-starring the odious Rick, a preening prick who is, unaccountably, irresistible to women.

During one particularly steamy scene in Peter’s production, Val’s character is seduced by Rick’s character in the back room of an art museum.  (This scene occurs in an art museum because Love Scenes is a classy movie.)  Things get out of hand for the two actors, and they wind up having actual sex.

“I screwed Rick with everybody watching — the whole damned crew!” says Val, just in case we missed it.

Rather than get jealous, Peter gets turned on, and so did my phallic friend.  Peter pens more sex scenes into the plot for his wife.  He decides to insert a scene in which Val has sex with an old fart, a famous art collector named Count Orlando, while she lies rope-bound to a bed.

In other words, in choosing his next kinky fantasy for Val, Peter picks a pickled pecker.

All of this sex and nudity is puckishly perverse, and my pesky pulchritude was plenty pleased with all of these perversions.  But at times the film’s brilliant dialogue — sparkling with wit and sophistication — intrudes upon the more important elements:  sex and nudity.

Peter and Val:  (smiles and giggles)

When all was said and done, my penile projection was placated, although an Internet interview with star Tiffany Bolling cast a pall on my perceptions.

“The nudity bugged me, like in Love Scenes, and I would never do a film like that again,” Bolling pouted.  “The bottom line to it was that there was a lot of nudity in it, and a lot of simulated sex scenes … I don’t want people coming in and getting a joyride off of me trying to get my work done.” 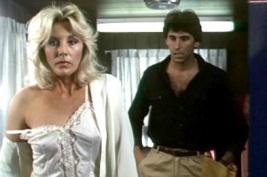 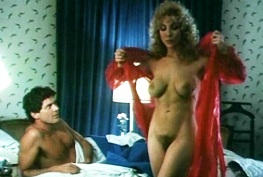 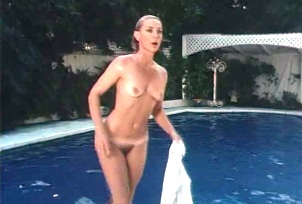