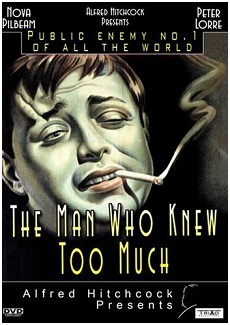 Directors are forever ripping off Alfred Hitchcock, but no one borrowed style and technique from the “master of suspense” better than Hitchcock himself.  Hitch would like something about one of his early films, and then perfect it in whatever project he was currently involved with.  In 1956, he decided to remake an entire film when he shot Jimmy Stewart and Doris Day in The Man Who Knew Too Much.  Some film fans think the original, filmed in 1934, is superior.  Decide for yourself by clicking here.