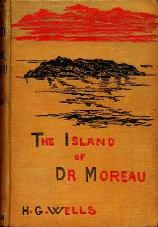 Of the handful of H.G. Wells classics I’ve read, The Island of Dr. Moreau is probably the most thought-provoking – and the least entertaining.  It’s morbidly interesting because, unlike the space aliens in The War of the Worlds or time travel in The Time Machine, the themes Wells explores are grounded in reality:  evolution, nature versus nurture, religion, and man’s relationship to his fellow animals.  But Island is nowhere near as much fun as the author’s other science-fiction stories because its protagonist, Prendick, does not hunt, chase, or flee from Dr. Moreau’s monstrous creations (a hybrid of humans and beasts); mostly he just observes them.  And these observations are not so much thrilling as unpleasant, a depressing reminder of all that is wrong with human nature, and science run amok.