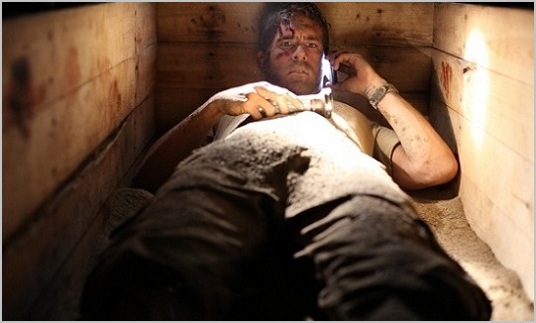 It’s hard to imagine anything more terrifying than being buried alive.  It’s a legitimate fear because unlike, say, meeting Freddy Krueger in a bad dream, premature burial is grounded in reality.  According to Wikipedia, George Washington so feared being mistakenly interred that he arranged to have his burial deferred until 12 days after his death.  Over the centuries, this type of horrific error was not uncommon.

Not to miss out on exploiting anything unspeakable, movies and TV are replete with stories depicting premature burial, from The Alfred Hitchcock Hour (“Final Escape,” 1964), to The Vanishing (1988), to Buried, now playing in a theater near you.  And because this Ryan Reynolds showcase takes place in another waking nightmare, the Iraq war zone, Buried plays on even more nerves.

Reynolds portrays Paul Conroy, a truck-driving contractor in Iraq.  After his convoy is ambushed, Conroy wakes up in a wooden box, presumably six feet under.  He learns that he’s been kidnapped (“one of the only functioning businesses over here [Iraq],” we are told) and deposited belowground by terrorists demanding a ransom.  The entire 94-minute movie takes place inside his coffin – and that presents a challenge for director Rodrigo Cortes.  The horror of Conroy’s situation is obvious, but how to generate suspense from the situation?  Through a cell phone, of course.

Cortes builds some tension, but only to a degree.  Aside from one sequence involving an unwelcome “visitor” to Conroy’s tomb, I did not experience what I’d call fear.  Discomfort, yes.   Claustrophobic anxiety, you betcha.  But fear?  Not really.          Grade:  B- 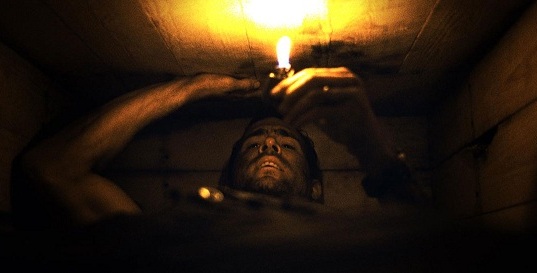 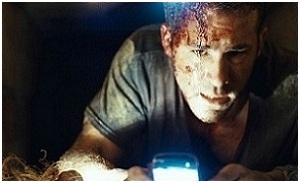