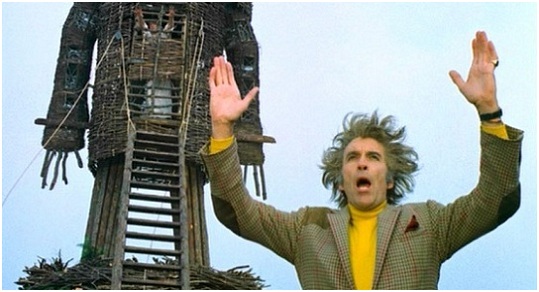 In 1973, some of the folks at Hammer Films, a British film factory best known for schlocky horror product, decided to get more ambitious.  Christopher Lee, of Frankenstein and Dracula renown, wanted to stretch his acting talents, and so he teamed with screenwriter Anthony Shaffer (Frenzy) and director Robin Hardy to create an original, low-budget chiller they dubbed The Wicker Man.

The result is a true 1970s oddity:  a mystery movie revolving around an epic clash of religions – and a film that feels both dated and timeless.  What’s peculiar is that the “datedness” of The Wicker Man actually works in its favor.  The setting is a Scottish village inhabited by free-loving, guitar-strumming pagans.  With their strange apparel, uninhibited sex lives, and affinity for folksy ballads, these people would seem equally at home in medieval Britain or in Haight-Ashbury during the “summer of love.”

The conflict of the plot is twofold.  Edward Woodward plays a policeman who is staunchly Christian, virginal, and closed-minded.  Sgt. Howie is summoned to an isolated village named Summerisle to investigate the apparent disappearance of a young girl.  Once sequestered on this island, Howie is doubly challenged.  He receives little cooperation from the odd villagers he interrogates, and his very core goes to war with the way these mysterious people choose to live.

The ending of The Wicker Man is justifiably famous, not only for its twist, but also for a truly memorable final shot.  I’d place that image on par with the exalted Statue of Liberty visuals in Planet of the Apes.

A word of warning:  There are multiple versions of The Wicker Man on the market; beware the 88-minute, truncated version, which is choppy and ruinous of the film’s opening scenes.         Grade:  B+ 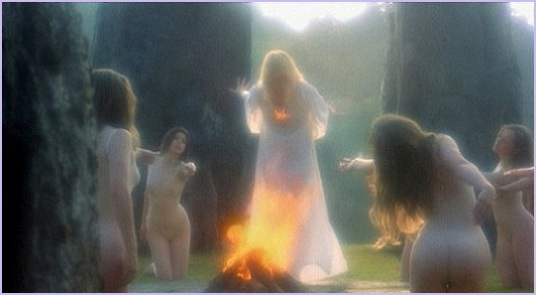 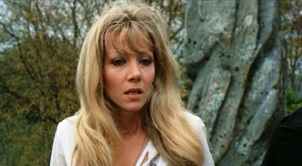