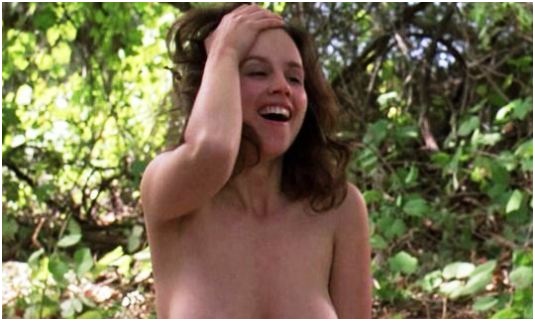 Just Another Boring Day in 1990

You are a typical heterosexual male.  You’ve always liked James Bond movies – especially the “Bond girls.”  Playboy Bunnies are fantastic, as well; too bad you never meet any women like that in real life.  And then there are the starlets – those cute young things who routinely get their heads chopped off (or eyes gouged out) in lowbrow horror movies.  These eye-candy actresses never seem to go on to become Meryl Streep, so what the heck becomes of them?  They probably marry Texas oil millionaires.

So you drive to your mundane job in your cheap car, park the rattletrap, and then walk to the parking-lot elevator.   The year is 1990.  Another soul-killing Monday in your cubicle awaits.

But wait.  Who is that stunning creature sharing the elevator with you?   She looks like someone you know … you must be dreaming.  But no, you are not.  You are in this familiar, shoddy elevator with bubblegum stuck on the floor, and you can feel the band-aid on your chin where you cut yourself shaving … so you are definitely not still in bed.

(“The tone is crude, raunchy, and leering, with kill scenes combined with more nudity than usual; we’re even invited to check out a hot chick’s body after her face has been sliced in half by garden shears.” – Slant Magazine)

Why yes!  She was in Friday the 13th Part V: A New Beginning.  You just watched it the other day.  How the hell did she get in an elevator with you?

(“[Fans] were looking for sex, violence and creative kills.  This was delivered, including a pretty risqué and quite awesome sex-in-the-woods sequence, which was actually trimmed by the censors of the day.” – 7M Pictures)

Maybe you should say something to her, find out if you are mistaken about all of this.  After all, what are the odds you are riding in the same elevator with a gorgeous actress from a famous horror movie – especially since you happen to be in Ft. Worth, Texas, not Hollywood, and on your way to your boring job?  The girl does not look at you.  She keeps her eyes on the floor.  Probably staring at that bubblegum.

(“Tina and Eddie sneak off to have sex in the woods.  The Act Itself is one of the steamier in the series, but the big number is after Eddie heads out to the river to wash up, and Debisue Voorhees rolls around and around to show off about 93% of her body, although she demurely crosses her legs to make sure that we don’t see something immoral.” – Antagony & Ecstasy)

You steel your nerves, clear your throat, and say hello to her.  Then you tell her that she looks familiar.  Has she acted in a TV commercial or something like that?

(“The worst Jason story, but the best nudity of the entire series!” – About.com)

She smiles, giggles a bit nervously, and says no.  But by now you are convinced; you recognize that smile and that giggle.  You are in an elevator riding to your dead-end job with Debisue Voorhees, whom you later learn is also “Deborah Bradley,” erstwhile actress turned journalist working for the same company that you work for.

(“The spiciest entry in the series, it boasts the most T&A.” – Slant Magazine)

The elevator reaches the ground, the doors open, and you watch as this woman – a living, breathing symbol of sex in America – strides down the sidewalk.  Did you just blow your only chance at dating an honest-to-goodness, genuine Hollywood starlet?

Friday the 13th Part V: A New Beginning is on cable.  You watch it and you remember Debisue Voorhees.  You Google her.  You find her on Facebook.  You e-mail her.  Will she even know who you are?

A few days later, there comes a reply:

You are a typical heterosexual male, and you’ve always liked horror movies – and especially the starlets who appear in them.