When this low-budget sci-fi flick opens in theaters later this month, I predict audiences will fall into one of two categories – and neither group will be happy. Group 1 will comprise viewers upset that the movie fails to live up to its scary title.  The promos for Monsters sure make it look like another War of the Worlds.  It isn’t.

There are aliens in the film, but if you run to the concession stand, you’ll miss them.  There is also suspense in the movie – but the suspense comes from wondering when the suspense will begin.

Monsters is an odd film, but not boring, and its promising beginning had me falling into Group 2:  viewers hoping for an original take on a stale premise (the aliens are here!).  But that promising beginning refuses to end (45 minutes expire before anything “happens”).  Thus, we spend lots of time with the lead characters, Andrew and Samantha, but they aren’t terribly interesting people.   Andrew is a photojournalist who is coerced into escorting the boss’s daughter, Samantha, through a Mexican “infected zone,” an area south of the border where aliens are sequestered by the government.  It is refreshing that – for once – a potential couple in a Hollywood movie is more curious than antagonistic about each other.  But this getting-to-know-you phase is lengthy and has zero suspense.  Maybe, I hoped, Monster’s climax would reward its audience’s patience.  It doesn’t.

With its obvious allusions to illegal immigration – there is an imposing wall keeping the aliens in Mexico, and out of the U.S. – Monsters makes a mild attempt at social commentary.  Says Andrew when the pair first spots The Great Wall of Texas:  “It’s different looking at America from the outside.  When you get home it’s so easy to forget all of this … in our, like, perfect, suburban homes.”  Would the conclusion of Monsters make a profound political statement?  Or might we finally witness all hell breaking loose?

Alas, the movie is what it is, a low-budget (reportedly $15,000) mishmash; part science fiction, part romance, and part social statement.  Of that stew, the only thing that stands out is the budget.  I suppose I could cut newbie director Gareth Edwards some slack for making his film with such limited resources but, hey, a ticket to Monsters cost me the same as a ticket to The Social Network.  So I won’t.   Grade:  C 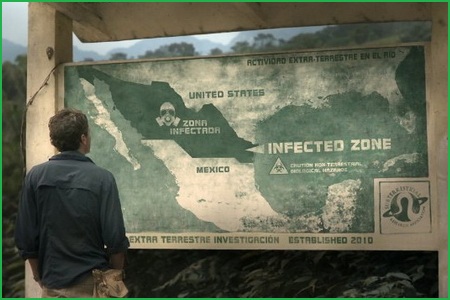 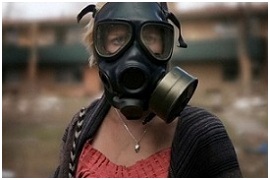 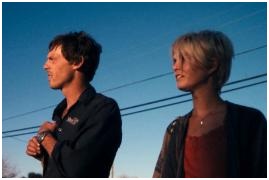