Moviemakers go to great extremes to frighten us.  They will concoct sociopathic monsters with tragic childhoods and perverse predilections, or hatch drooling aliens on a spaceship a million miles from Earth.  But, hey – why go to all that trouble when you can simply drop a great white shark into our favorite swimming hole?  Or, as director Carlos Brooks does in Burning Bright, let loose a Bengal tiger in our living room?  And not just any tiger, but one that hasn’t been fed for two weeks and thus is rather, uh, “irritable.”

As Spielberg proved in Jaws, we humans haven’t evolved so much that we don’t still jump when we spot a menacing fin gliding toward us in the water and, I don’t know about you, but Tony the Tiger tiptoeing out of my bathroom will always get my attention.  With skilled direction, clever editing, and a soundtrack that knows what it’s doing, a movie that exploits our primal fears can be disturbingly effective.

Brooks’s problem in Burning Bright is the set-up:  How do you get a ferocious feline into a sealed-off house with a cute girl and her autistic younger brother?  In retrospect, the explanation that Brooks and his screenwriters expect us to buy is ridiculous, but by the time you stop to think about it you won’t care, mostly because you haven’t had time to stop and think about it.  Once that girl and boy are trapped in the house with the cat, your brain will spend the next 45 minutes thinking one of two things:  “Where the fuck is the tiger?” and “Where the fuck is that tiger now?”

This is a small movie, nowhere near as epic as Jaws, but it depresses me that a thriller this skillful and fun (likewise for the similar, crocodile-themed Black Water) is relegated straight to the DVD shelf while big-budget junk like the A Nightmare on Elm Street remake gets wide release.  Sure, Burning Bright is derivative (it’s basically Cujo mixed with Halloween), and its plot is absurd.  But I’ll wager you won’t care about any of that while it’s playing.  You’ll be too busy glancing at corners of the screen, anxiously asking yourself, “Where the fuck is that tiger?”      Grade:  B+ 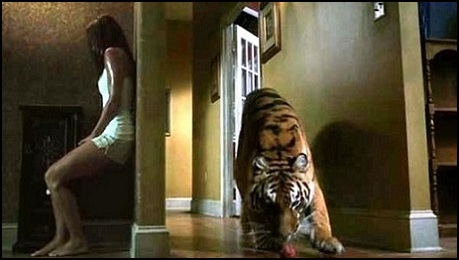 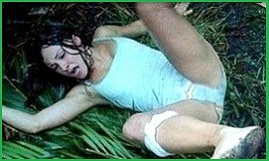 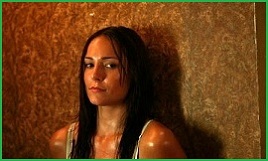