A Prophet is a tough film to criticize.  It boasts a whopping 97 percent approval rating on rottentomatoes.com, so other critics are obviously impressed.  It’s a serious crime drama that was nominated for Best Foreign Language Film.

I thought the movie was compelling – but not riveting; good – but not particularly memorable.  It’s always watchable, but never as sensational as Scarface, nor as epic as The Godfather, and it has fewer colorful characters than GoodFellas.   Do I recommend it?  Sure.  Is it a “great” movie?  I don’t think so.

A Prophet follows the career of prison inmate Malik El Djebena (Tahar Rahim), a young convict who gets recruited by Corsican crime boss Luciani (Niels Arestrup) and then offered protection from other inmates.  This presents a problem for Malik, who is drawn toward the Arabic prisoners because of their shared ethnicity.  As we watch Malik progress from the Corsicans’ gofer to polished criminal, we realize it’s just a matter of time before he and Luciani will clash.

All of this is well-acted and directed.  But we learn nothing new about criminals or incarceration.  Prison is hard on young men:  check.  Prisoners segregate themselves by racial or ethnic identity:  check.  Men who enter penitentiaries are not rehabilitated, but simply learn how to become better criminals:  check. 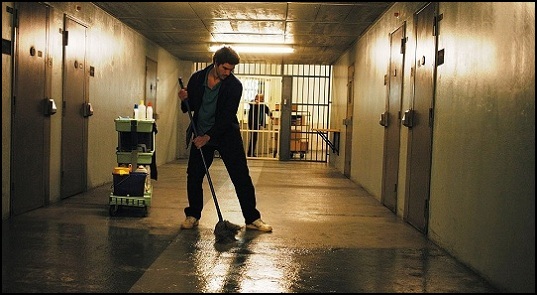