Let me propose a little scenario.  You go to the cinema, purchase a ticket, grab some popcorn, and find a seat somewhere in the middle of the theater.  I walk in and sit down right behind you.  You have your buttery popcorn; I have a cattle prod.  Every 10 or 15 minutes, preferably during a quiet scene in the movie, I lean forward and ZAP! you in the ass with my cattle prod.  Then we both resume watching the film, until I decide to ZAP! you again.  When you leave the theater, you tell all of your friends that you went to a scary movie and jumped out of your seat numerous times.

Sound absurd?  To me, my cattle prod and I are just a low-tech version of what filmmakers routinely do to audiences with modern horror flicks.  Case in point: The Crazies.  I counted at least half a dozen moments in which, ZAP!, a hand, face, shadow, or whatever suddenly pops into the frame, accompanied by what sounds like a ton of bricks being dropped onto a piano keyboard, or shrieking violins out of an orchestra pit from hell.  The soundtrack is nothing more than the high-tech equivalent of my cattle prod, a cheap way to make you jump in lieu of genuine fright.

In the case of The Crazies, that’s too bad, because as horror films go, director Breck Eisner’s movie is pretty good.  In fact, it’s much better than most films in the genre. Of course, the bar is set so low for horror movies that you can take that praise for what it’s worth.  But The Crazies is well directed and edited with an eye for tension. Also, the actors actually seem like real people.

I think we are overdue for a horror-movie renaissance.  The last time that occurred was in the 1970s, and the genre seems to rejuvenate itself every 40 years or so, and so the time is ripe.  Great scare films seem to have one thing in common:  We are intrigued by the characters, not just the situation.  Think of Jack Nicholson in The Shining, or Linda Blair in The Exorcist.  When I think back on The Crazies, I’ll recall it as a decent horror movie — but mostly I’ll think of cattle prods.         Grade:  B- 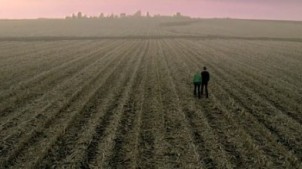