Cyrus is a movie you want to like, if only because it dares to be different.  Here we have corpulent Jonah Hill (Superbad) in a comedy, only this time it’s not produced by Judd Apatow, and Hill’s character actually has some depth.  And the star is John C. Reilly, whose major attribute is that he doesn’t look like a movie star.  This hangdog actor could be your mechanic, or veterinarian.  In other words, Reilly’s characters are instantly relatable.

Reilly plays John, a sad sack who’s been divorced for seven years yet can’t seem to let go of his ex (Catherine Keener), who is soon to remarry.  At a party, John gets drunk and somehow winds up with vivacious Molly (Marisa Tomei), who finds him charming.  Things are looking up for our hero.  But then he meets Cyrus (Hill).  Cyrus is Molly’s 21-year-old son and he has  …  issues.  Cyrus initiates a passive-aggressive campaign to get John out of his mother’s life, because in his mind, there is only room for Cyrus and Molly.  It’s at this point that the film falls apart.

I envisioned the story going in one of two directions:  It could have morphed into Neighbors, in which a seemingly normal mother and son reveal their true psychotic selves.  Or it could have become like The War of the Roses, with the battle between John and Cyrus escalating to epic proportions.

Alas, Cyrus does neither.  It’s not funny enough to succeed as pure comedy, and its attempts at sensitive male bonding are shallow.  Directors Jay and Mark Duplass don’t help matters with their filming style.  They shoot the action as though Cyrus were the latest Bourne adventure, with hand-held, herky-jerky zooms that are completely out of place in a movie like this.          Grade:  C 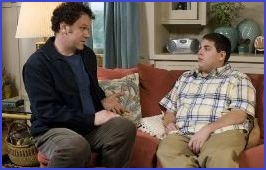 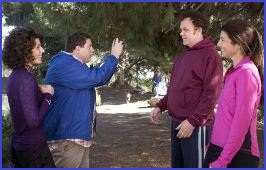